When I turned 40, I felt compelled to write about it. The Vancouver Sun ran my piece in which I prattled on about how could I be 40 when I was really a 20 year-old in middle age skin and so on. Like I was the first person to ever be shaken by an age milestone. I’m embarrassed just mentioning it.

Then last year, nearly a quarter century later, I wrote about 40 again, this time in tribute to my first born, the baby I had 40 years earlier. If you missed it, the calamitous tale that featured a stoned doctor and an enema and resulted in the most glorious person is told here.

But then, you know what I did? A year later – 40 years ago today – I had another baby. Family planning ‘70s style. 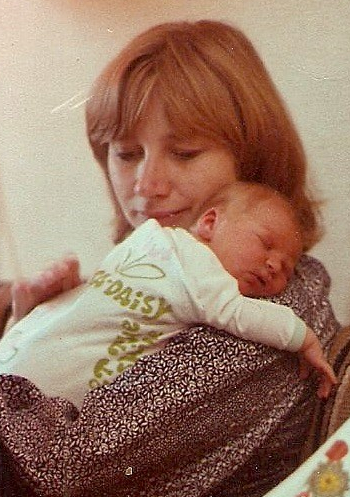 Oh, she was sweet. Sunny. Quiet. Slept so much I’d stick my finger under her nose to check she was breathing.

Her adolescence wasn’t like that. From age 12 on, she breathed hard.

For her birthday today, I put together an album of events over her 40 years … Kelsey as a newborn, Kels in first grade, Kels wearing an I-hate-you look and dark lipstick that her grandmother said looked like a ‘gash.’ The album included a letter from that same beloved grandparent that started with the line “Dear Kelsey, I’m sorry I blasted you Tuesday, but …” It’s a wonderful missive and fully in character.

And I told her, “When you were 13, it was like you entered a tunnel. A few months later you pulled your sister in, then I followed. We spent a few years in that tunnel – shouting and laughing and crying – then when we came out you were beautiful and I looked like hell.”

I remember the moment when the future came into focus for my Kels. She invited me to join her at a university lecture about international relations and I watched her throughout the talk, rapt with discovery and interest. A month later she announced she had to move to Ottawa to pursue her education.

Her birthday album shows her about to catch the flight to that next part of her life; Kels in regalia receiving her BA from Carlton and her Masters from Ottawa U; Kels in her career working with families and communities in Mali, Senegal, Namibia; Kels with her fellas – a man who turned out to be just the right husband and dad to their two little boys.

Loving this girl has always been fraught with anxiety.

When she was three I watched from a viewing platform as she leapt into the deep end of a pool during a swimming lesson. The instructor hadn’t seen her. She came up coughing and blubbing and ready to jump again.

It was a metaphor for her life as she makes a difference in this world in ways I can barely comprehend. She’s been in disaster zones, tribal zones, scary zones. Just last week she was in Haiti. Next week, Katmandhu.

Still, my chicken is a homing pigeon who maintains the best friends of her life in her hometown and cherishes family above all. 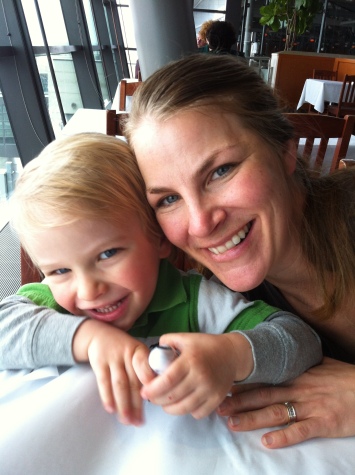 Others simply say,  I am so proud.

The final installment of my short 40-years-ago-I-had-a-baby series.

Happy birthday to my gorgeous girl.

We are richer for loving you.