It’s my birthday today and the name of this blog has become more nostalgic than forward looking. If you know what I mean.

Mr. WI64 woke me singing You’re 21 today, an English ditty that got me thinking about parents and birthdays past.

Mom and Dad took my brother and sister to The Cave for their 21st, I told him. The Cave was a supremely cool Vancouver nightclub in the style and era of Sinatra. Mitzi Gaynor was a regular performer and The Cave was on the circuit for all the cool cat crooners. Mr WI64 has his own Cave story in which Eartha Kitt made eye contact and spoke directly to him. A man will remember a moment like that forever.

Did they take you to The Cave? he asked.

Nope. Apparently turning 21 was less of a big deal by the time I got there. But then I could hear my mother’s voice which, as these things do, has become mine.

My 21st fell on the eve of me embarking on a career as a newspaper reporter. My parents took me to dinner and Mom handed me an envelope.

Here, she said. Happy birthday. I’d been saving for your education, but decided this would be a better time (a fair assumption given I kept skipping final exams to take summer jobs on newspapers). No Pollyanna, my mother was all realist.

That envelope held just enough cash to buy myself a vintage 1961 Hillman Minx with four-in-the-floor stick shift. The freedom wheels of my new life, it had a dodgy starter and windshield wipers I operated via string pulled through the driver’s window.

Funny the things that commit occasions to memory. I recall my fifth birthday because I had the mumps and my mom and I had a tea party for two at my pint-size table and chairs. I wore the party dress she’d sewn for the occasion.

My 10th stands out because I sat on scissors and required six stitches. Still have the scar.

My 30th plays large because my dad had just died, but my sister rallied the family  for a party in which every member wore variations of 30 t-shirts, as in My mommy is 30, My auntie is 30, and so on. Mine said I am 30.

Some birthdays stand out for the celebration, some for who was absent, some because life just trundled on despite it being my birthday. Many I can’t find, no matter how hard I rummage around in my memory bank.

But as I get older and have had more birthdays than I have to look forward to, each seems as important as the last.

I thank Facebook in part for that. It has a knack for making you feel loved when it announces the date to all your friends – some close, a few you hardly know – and they respond with greetings.

On my 60th, Facebook lit up with these and other family images. 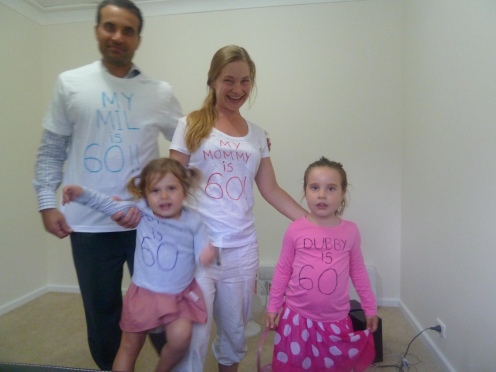 Today started with breakfast made by a man for whom two surgeries in the past year have made difficult a lot of the things that used to be easy.  My sister phoned, my daughters and grandchildren phoned, friends connected in person and virtually.

I never did get to The Cave. And so far this day hasn’t held the high definition of mumps or stitches, but I’ll remember it. In part because I’m writing about it – that’ll help. But mostly because right now, I have pretty much everything.